Questions, comments, suggestions and complaints are all welcome. Please include the URL of any page you refer to. If the website seems not to function at all, please contact info@aodn.org.au, noting that our systems are not monitored 24/7 (being research infrastructure rather than operational).

Apple has withdrawn support for the Windows version of Quicktime, the movie player that we use and recommend for the fli-format animations that we produce. This is because of the security vulnerability described by [Christopher Budd of Trend Micro], prompting calls for Quicktime to be uninstalled immediately from Windows machines.

What to do? Firstly, note that Christopher said "Both vulnerabilities would require a user to visit a malicious web page or open a malicious file to exploit them" so it's still safe to use Quicktime to view content produced by us. But still, you or your IT department may want to uninstall Quicktime so you don't accidentally use it while browsing off-piste. We will either 1) find another viewer for our existing archive of .fli files, and/or 2) find a better way of converting our animations to better-supported formats. We have tried both these options in the past, but not to our complete satisfaction. We'll keep you posted. Suggestions are welcome. David dot Griffin at CSIRO dot au.

13 July update: we will gradually provide more animations in mp4 format (e.g. see latest seaglider deployment in GAB). We have switched to using PowerFlic for viewing the existing archive of fli animations but make no assertion that it is safe for others to use.

Precision-orbit altimeter observations of sea level, which began in 1992 with Topex/Poseidon, are set to continue. Jason-3, the fourth altimeter in the series, was successfully launched from Vandenberg Air Force Base in California yesterday at 18:42 UTC. Initial telemetry reports show that all systems are in excellent health. The final orbit will be reached in 18 days with the beginning of cycle-0 on February 4, at which point members of the Science Team (including ourselves) will start to assess the accuracy of the data. The observations will initially be coincident with those by Jason-2, for comparison purposes. Jason-2 will later be moved into a tandem orbit, filling in the gaps between the observations by Jason-3 in order to maximally improve maps of sea level and surface currents such as the ones made by us. More: [CSIRO sea level team site].

Where is RV Investigator? 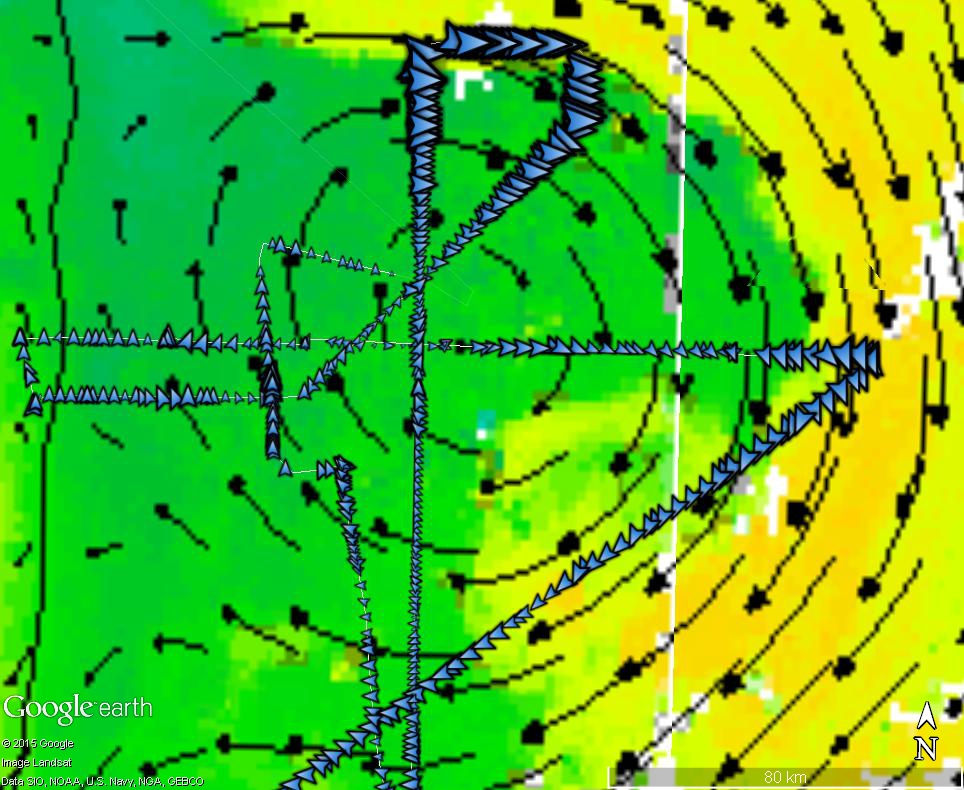 We are now showing the location of Australia's new Marine National Facility, RV Investigator on whichever of our small-region plots she happens to be in. Current velocity data from the Acoustic Doppler Current Profiler is also shown, as well as her measurements of sea surface temperature, or chlorophyll, as in example 1 at right.

To see the details of her track and observations along with whatever else you want to view using Google Earth, e.g. IMOS SST and geostrophic currents, gliders, etc, use this kml file (v2), to see, for example, the current velocity averaged from 30m-80m depth, as shown at right.

We've been working for months towards the goal of having all the IMOS mooring, glider and radar data included on the high-resolution plots of the recently reprocessed SST and Ocean Colour data (as well as the Argo and other data already there). The job is now finished for 2004 onwards. Some statistics (gleaned today from our revision-monitoring tool): there are 679,562 individual SST images and 82,545 ocean colour images. Few people will want to click through so many, especially since clouds spoil most of them. So we've done two things to speed up the viewing process: 1) string them together into animations, and 2) create galleries of the best images, based on our estimate of the cloud-free fraction. These can be reached via the Date Selector once you have chosen a region. A few ocean colour images from the galleries have caught our eyes. Two are discussed in today's news item. A third, in the Great Australian Bight, puzzled us. Is that wave-train pattern near 35.5S, 132E an atmospheric phenomenon or internal waves in the ocean? Views are welcome.

Our new website is now live, featuring a new look, in-browser animations and easier navigation. It coexists with OceanCurrent v1.0 and until the renovations are complete you might end up back at the old site if you navigate deeply into the new one. If that happens, simply follow the link to the new site from the old home page. If you find something not working at the new site, please try a newer browser or update the browser you are using. If that does not help, please let us know the problem, and what browser and platform you are using, and use the menu-bar link to the old site while we fix the new one. We hope you enjoy the look and additional features of the new site. Feedback is welcome.

We are nearly ready to go live with our new look. Let us know if you would like to participate in the beta-testing.

The data holdings at EMII are constantly growing and being revised. Today we finished a routine re-scan and re-plot of all the glider data, partly in preparation for the upcoming, larger, task of re-plotting all the SST imagery with gliders and other IMOS in-situ data overlaid.

We now have new map series for Brisbane-Sydney and eastern Tasmania and are gradually generating all the images and animations for them. 2012-2015 are now done for Brisbane-Sydney, for which we are using the new (fv02) versions of the L3U SST product, and overlaying the newly re-processed Coff's HF radar data, glider data and current-meter data (as well as drifters and Argo of course). If this all goes well we will soon re-generate all the graphics for all other regions.

33 new or re-processed Australian National Mooring Network ADCP data files have become available since our last (25 Sep 2014) scan of the IMOS portal. We have now also read and plotted the data from non-ADCP current meters, including 47 that are part of the Deep Array, 6 deployed for the Satellite Remote Sensing Altimeter Calibration sub-facility, and 2 that are part of the SEQ ANMN NRS array. We have also completed tidal analysis of all the ANMN data. [more...]

Production of the multi-day-average SST imagery stalled over the Christmas-New Year break. This outage affects our large-area graphics products and the outer-zoom level of the Google Earth imagery. We hope this may be rectified next week. 14 Jan: Fixed. 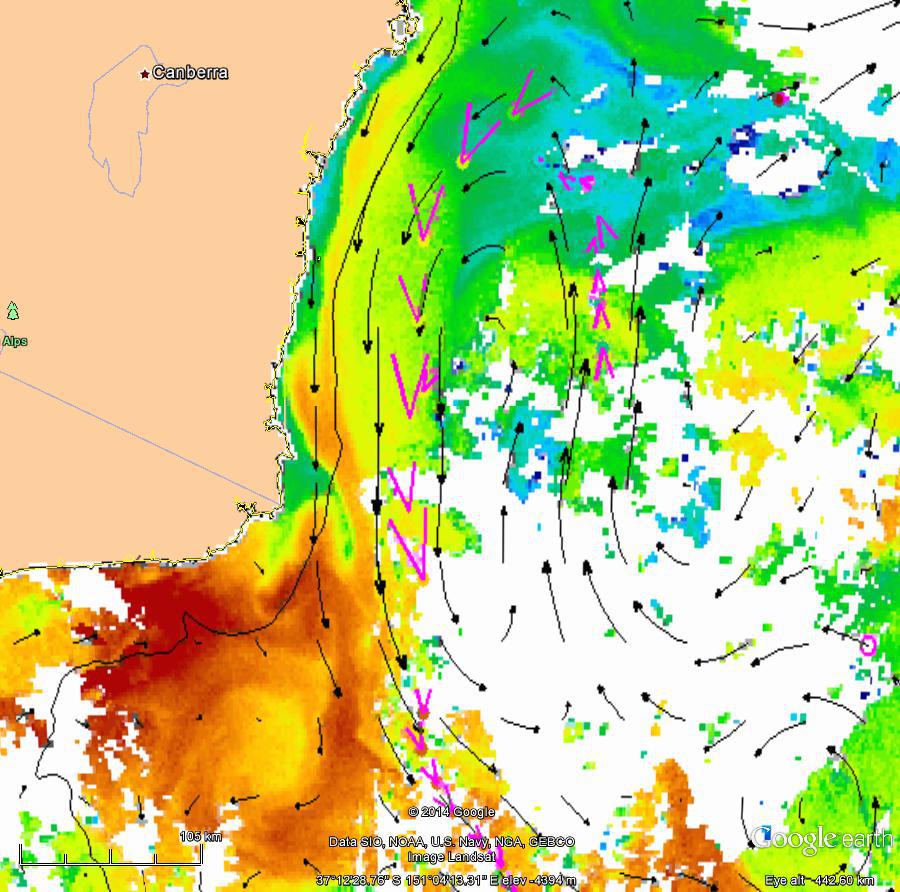